Research databases like the Swedish Life Gene project have proven problematic and the Swedish Government has tried to find solutions for collections of samples and data for 'future research', a purpose that is not considered specific enough by the Data Inspection Board. 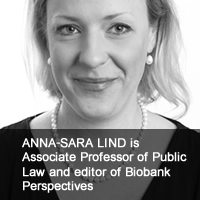 In 2013, a temporary Act on research registries known as the "LifeGene Act" was enacted in order to legalize research conducted on registries that higher education institutions are responsible for. The act will be valid until 31 December 2015.

This spring, the Act was reviewed and analysed. On March 24 this year, the Ministry of Education and Research published a memo where they suggested that the temporary Act should be valid until 31 December 2017.

The reactions to this have not been silent. The consultation responses show that the reactions can be divided into two camps. On the one side, we find those in favor of the act. Research institutions such as the Swedish Research Council do support a renewal of the act. On the other, we find legal institutions that have a special concern and responsibility for integrity matters: Both the Data Inspection Board and the Chancellor of Justice are very critical.